Kherson is Putin’s Stalingrad. Time is Not On His Side.

A friend asked me to update my Ukraine thoughts yesterday.  It turned out I had a lot to think through, so here goes with my apologies.

A lot of people believe that time is on Putin’s side.  That argument is framed in terms of years.  The broad sweep of geopolitics and grand strategy so beloved of armchair generals (and political scientists) everywhere.

Time is NOT on Putin’s side if you think in weeks and months.  If the Russian’s can’t hold their ground in Kherson for the next 3 months, your grand sweep of geopolitics gets swept into the dustbin of history (sorry – couldn’t resist the mixed metaphor).   Historians know better than to ignore the little details.

The Russian’s prospects in Kherson are dismal and getting worse.  So things in Ukraine are going as good or better than I had hoped.  Why?

Outside of what Russia can fly in, the Russian war effort has narrowed to the whatever and whoever is already in that pocket West of the Dnipro (zoom in on the map here).  Stuff and men not already across the river are no longer relevant.  Equally important (and fantastically stupid), that stuff and men likely can’t get back over the river.

So will the Kherson pocket collapse?  The probability of collapse only increases as the weeks go by.  Why time is not on Putin’s side.  Ukraine launched its counter offensive last week.

The Ukrainians just need to force the Russian tempo without grinding down their own troops.   If they are careful about not over-pressing attacks, they likely precipitate a Russian collapse before the Ukrainian army runs out of steam itself.  The longer #2 and #3 go on, the more weak spots Ukraine will find for #1 (breakthrough).

Every week that goes by, the Russians will get weaker.  Their supplies of morale probably runs out before the shells do.  Every Russian soldiers West of the Dhipro knows he is trapped in hostile country with blown bridges behind him.  Think yourself into that personal situation for a moment…

Moreover, I don’t see how Putin extracts himself from this trap.  He can’t keep the bridges in repair.  So…

So my guess is the Kherson pocket falls in the next few weeks/months.  Its final images an abandoned mass of tanks and trucks at the Western approaches to those bridges.  Russian soldiers trudging across on foot or (more likely) trudging West towards POW camps.  Those photos will be very very hard to censor or explain back in Mother Russia.

Maybe Putin can paper over another defeat?  I don’t think so.  Kyiv was embarrassing.  Kherson will be humiliating.  Practically, he will have lost a equipment and men he can’t easily replace.

The above is fairly obvious from the situation on the ground.  I’m just guessing at what actual Ukrainian generals have pretty obviously put into motion.  Hopefully I’ve avoided straying over the line into “armchair generalship.”

But now lets cross that line, settle into that armchair, and guess what they might do next.  I don’t expect to be right here.  I am expecting to look foolish.  But its worth noting the possibilities.

So as we slide into year’s end, Putin will likely have lost an big red blob of territory around Kherson.  He will be struggling to supply and hold the last big red blob around Melitipol.  Crimea will be under threat.  He will have lost men and hardware he can’t easily replace.  His economy will be struggling further as inventories and spare parts run short.  All this will be impossible to hide from your average Russian.

Does the above end the war?  I have no idea.  Putin’s next move is hard to guess.  Especially because he’s exhibited such spectacularly bad judgement since Feb 24th.  But he will be move from a position of weakness – on the ropes and reeling.

So to go back to my friend’s question, Ukraine has been progressing more or less as I’d expected.  As I noted in a prior post Putin has trapped himself as the organ grinder’s monkey.  Ukraine is now grinding the organ faster.  Betting the monkey will stumble again.  We can’t be certain that will happen, but the bet gets more likely as the weeks go by.

Putin cannot force a decision.  He can’t stop the war from grinding on.  Grinding his army to pieces along the way.  Zelensky just told the NATO summit the war likely ends Christmas 2022 – the front half of winter on the steppes.  My guess is that is the intersection of two lines

Zelensky’s bet is that Russia’s army will break someplace, somewhere.  Keep grinding the organ and wait for the monkey to stumble. Forcing Russia to the negotiating table in a position of weakness.

How accurate are the HIMARS?  The black circles below are show the impact sites of a recent strike.  Another video I’ve seen shows a neat, evenly spaced row of craters hitting just one traffic lane of the bridge upstream.  The bridges are still standing.  Ukraine can repair the structures in some future peacetime.  But the roadways are un-usable Swiss cheese. 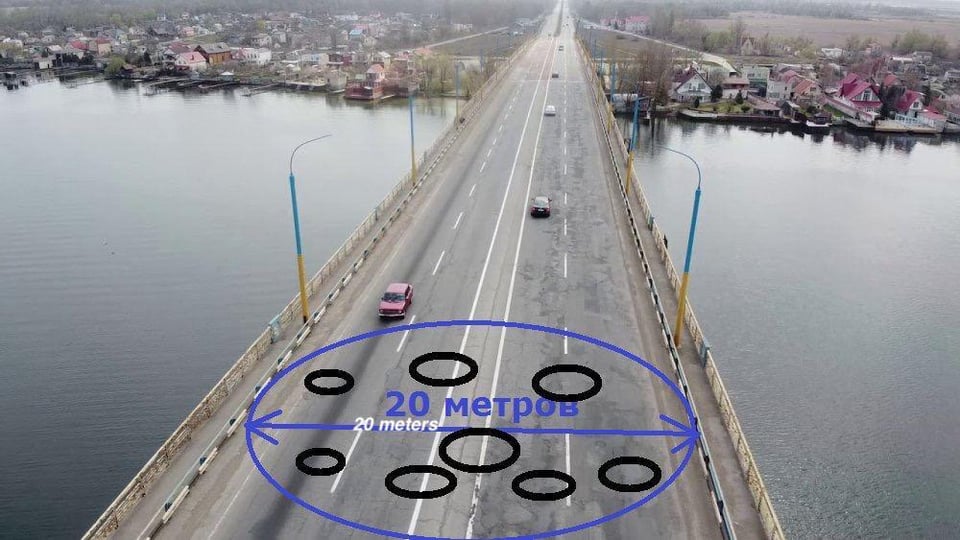 Ammo Dumps:  HIMARS fiendish accuracy means the most dangerous posting in the Russian Army today is probably working in a command post or ammo dump – which have been exploding spectacularly for weeks now.  The actual front lines are probably statistically safer.  The videos are worth searching for.  The explosions are huge – mushroom clouds looming over entire cities.  The campaign has had a real impact on Russian artillery fire (based on hard data from Nasa’s FIRMS wildfire-spotting satellite). 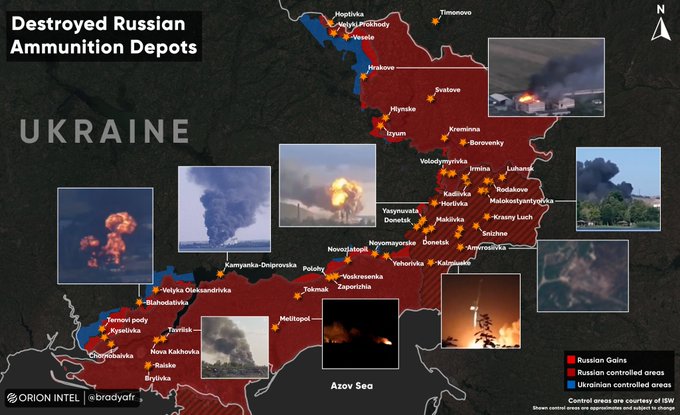