The Fed isn’t know for telling simple stories in plain English, but Fed Governors Mary Daly and Esther George are doing just that.  Their narratives contradict the dominant narrative of the business media/pundit complex.  Maybe they are trying to tell us something?

The media/pundit/sentiment complex is all about Armageddon – drama gets clicks.  Daly (considered a dove) and George (considered a hawk) both see a low-drama path to the economy settling down without a major crisis or deep recession.  The wisdom of the crowds in commodity and bond markets are voting with the Fed governors so far.

Not also that Fed Governors and the financial markets are out on the field.  The pundits are just commentating from the stands.

Before we get to Daly’s forecast (below), lets start with a chart and the sentence in bold.  She’s setting her stage this way for a reason.

While adjustments in financial markets after FOMC communications are not unusual, the speed and magnitude of the movements during the past six months have been unprecedented, as the figure shows.

The fact that financial conditions and real activity are adjusting to expected monetary policy tightening, even when actual rates have not fully risen, means that long and variable lags may not be as long, or variable, as typically assumed. 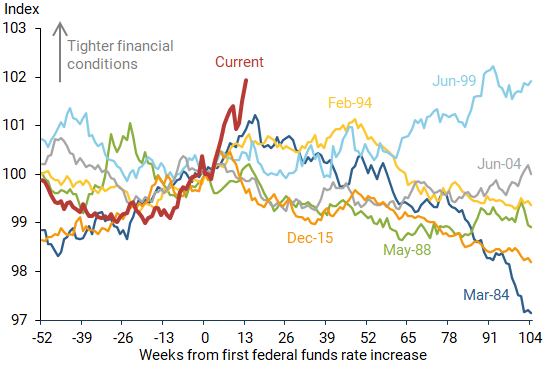 Ms Daly goes on to share her own forecast (my emphasis below).  It is surprisingly specific and contrary to what you’ll read in the WSJ or FT.  Many want us to believe the behind-the-curve Fed is desperately clutching at straws.  I don’t see that here.  Time may prove her wrong, but she makes a fair. reasonable argument based on what we know today.

The question is: how much economic slowing are we likely to see? Here, history gives us some useful reference points.

One is the Great Inflation of the 1960s and ’70s and the subsequent Volcker disinflation, which, by the mid-1980s, had brought inflation down from its double-digit peak. But it came at a very high cost, pushing the economy into what was then the most severe recession since the Great Depression.

But this is not the only example or precedent of how the economy reacts to policy tightening. In the mid-1990s policymakers faced a rapidly declining unemployment rate and worried that a 1970s-style high inflation environment was coming. So they raised interest rates by 3 percentage points in roughly a year. This rapid policy tightening put the brakes on falling unemployment, but the overall effects on growth were mostly benign. Most notably, the economy and the labor market maintained a relatively strong expansion through the end of the decade, and inflation remained in check (see Blinder 2022 for additional discussion of past tightening).

For a number of reasons, I expect our economic transition now to look more like the mid-1990s than like the 1970’s Great Inflation and subsequent painful disinflation. That’s because many of the factors that helped fuel the Great Inflation are not as prominent today.

…conditions in the economy are quite different now than they were in the Great Inflation. There is a sizeable amount of excess demand in both product and labor markets, supported by COVID-related fiscal and monetary policy. This translates into large, accumulated back orders for goods and historically high job vacancies in the labor market. Adjusting rates to slow the economy will most likely reduce these backlogs and high job vacancies before digging into current production and employment.

In economics terms, this would mean that we are on the steep portion of a fixed supply curve or Beveridge curve (see Waller 2022). And moving along those curves by reducing aggregate demand to return normal conditions would bring inflation down with a more limited effect on overall economic activity (Powell 2022).

In its extreme form, this implies that policy adjustments to lower inflation will be cost free. While I think that scenario is highly unlikely, I do expect the costs of adjustment to be moderate, with some slowing of GDP growth below its longer-run trend and an increase in the unemployment rate from the very low levels we see today.

There is another surprise here;  Another Fed Governor offering a direct, plain-English narrative forecast.  This is weird.  Especially because the stories diverge markedly from what market pundits and business media are saying.  That gap is worth minding.

I harbor deep suspicions about the media/pundit narrative.  All the bold-face magazine covers – regime change!, massive inflation!, run-for-the-hills!  This stuff gets clicks, makes reputations, and drives trading flows.  That is exactly why I mistrust it.

The Daly and George narratives are less exciting, but more reasonable.  We’ve had a massive shock.  Hopefully we work it out.  In a year the Ukraine War is over and supply chains have has sorted this out.  This year’s drama is mostly forgotten.

We’ll only know who is “right” with perfect hindsight.  I’m trying to stay open minded.  But I’m inclined to believe the commodity/bond markets and the Fed, not Larry Summers and a bunch of big-name investors talking their books.

As an aside, her speech also contains a very reasonable explainer for why the Fed didn’t act more quickly to raise rates.  She is correct here.  The Fed’s critics are only “right” with perfect hindsight – the second-to-last refuge of a scoundrel.

To manage these risks [deflation vs inflation in 2021] we needed to do more than just assess their likelihood. It was also important to stack the potential outcomes against the tools we had to deal with them. Unfortunately, with the proximity of the zero lower bound our tools are not symmetrically effective. When inflation is too high, we have ample room to raise the federal funds rate to pull it back down. But when inflation falls too low, and the zero lower bound binds, we have to rely on less robust tools, such as asset purchases (Cúrdia, Chen, and Ferrero 2012).

This meant there could be significant potential costs to overreacting based on emerging—but still limited—evidence of price pressures. Especially when any premature tightening would be hard to reverse and its consequences could hamper growth and productivity in the longer run.