I’ve recently sold all my index funds and am holding on to only two stocks (more on those in a later post).  The reason why experts (correctly) tell you NOT to do this is because people “never” buy back in.  You miss the following upturn.  Following that advice, I did not sell my index funds in 2008.  A few years later, those losses really were just a blip. That is what most folks should do.

I Actually Did Call The 2009 Bottom.  I May Not Manage That Again.

FWIW, I did actually call the bottom (in a note I can’t share) in March 2009.  I was working at a large mutual fund complex and I wrote an internal note titled “My Centre is Yielding. My Right is Retreating. Situation Excellent. I Attack!”  The title says it all.

Of course, the portfolio managers mostly ignored that note.  Maybe they didn’t get the historical reference to battle of the Marne?  More likely they were too busy hiding under their desks.  Even more likely they didn’t take me all that seriously.

But I did put the one (big) chunk of deferred bonus cash I had back into the market.  So I did pretty well out of it.  I’d have done better if I’d sold my index funds a few months prior.  So I’m doing that now.

There is ZERO guarantee I am right.  Nor am I all that confident in this move.  My need to preserve immediate capital is also probably different from yours.  So do not take this as advice.  But I thought I’d share the perspective.

First the Earthquake, then the Fires.

I think we are looking at a “double whammy” scenario similar to the 2008-2009 crisis. Or, if you like, the 1906 San Francisco earthquake.   The initial shock (the earthquake) was really bad.  The secondary shock (fires that burned what was left standing) was much much worse.

In the 2008 crisis, the initial shock was in the first half of the year.  A whole bunch of mortgage-backed securities, Bear Stearns, and Countrywide Financial going bust.    The market dropped about 17-%-18% from its highs, but it was all fairly orderly.  “Everyone” (including myself) thought the authorities were reasonably on top of it.  It was a bad crisis in a big corner of the financial markets, but still a contained crisis.  We were all wrong.

It is easy to smear the 2008 crisis into one long memory of misery.  But the real horrors started only after Lehman Brothers went bankrupt.  Followed by the bailout parade of everyone else who would have gone bankrupt – AIG,  General Motors, every bank under the sun, etc. etc.  Followed by the Main Street damage of nationwide foreclosures (remember foreclosures peaked in 2009 and 2010).  The “real” crisis hit one to two years later.

Have We Hit our “Lehman Moment?”  I Don’t Think So.

Assuming the analogy is correct, are we in the “Bear Stearns” phase or the “post Lehman” phase?  Everything I read and hear tells me we are still way too complacent.  The deaths haven’t piled up (yet).  People don’t have friends and family in ICU’s (yet).  Bars and restaurants are (still) open in most places.  People are still talking about “when” schools might re-open this year (they won’t).  Or when their kids athletic leagues will re-start (ditto).  That’s a whole lot of parentheses above.

So the full extent of the future economic damage remains hypothetical.  Just like the foreclosures of 2009-2010 as seen from mid-2008.  When it gets real, it will “get real.”

I think I’ve got an information advantage living where I do (Berkeley, CA).  We’ve been on total lock-down since Monday.  Grocery stores, hardware stores, and (thankfully for everyone’s sake) liquor stores/pot dispensaries.   But everything else is shut down tight.  The experience of that (and seeing the resulting evaporation of ANY business activity) has really clarified things for me.  Although the cabin fever still hasn’t set in (yet) and the wave of small business failures to come is still a hypothetical.

As best as I can tell, most of the country is still “cutting back” vs going cold turkey. In a few weeks, most Americans will live my present experience when (not if) their towns lock down too.  With most Red States lagging the Blue states.  Because polls show our current partisan divide extends even to a virus that threatens all equally?!?  It boggles the mind.

I also see the same complacency around the government policy response.  I’ve been (happily) surprised at how fast the idea of sending out checks has gained traction.  But I’m been dismayed at the hopefulness that mooted action has sparked.  I remain skeptical that Washington will act with appropriate speed and scale (more below).

I Hope I’m Wrong.  Some Counter-Arguments Considered Below.

“We’re more gun-shy of crisis after 2008 and have already discounted in a worse scenario.”

In market terms, we are already down @24% vs the 17% drop in 1H08.  So maybe more bad news is priced in?  Except that we “all know” a global pandemic that shuts down most non-essential business activity is going to be worse than a US-centric mortgage crisis.  So it makes sense for the market to be down more in that initial drop.

The panic selling hasn’t hit yet. We are still seeing fairly orderly markets.  I didn’t really notice the broader crisis 1-2 weeks ago (to my chagrin) because my own stocks were holding up well.  I didn’t understand I happened to own “haven” stocks that people were buying when they dumped oil and cruise lines and etc…  We’ve seen some hints of liquidation selling in the last few days.  But we’ve also seen market rally attempts.  People asking “when should I buy back in?”  Also  a whole lot of Americans haven’t dared peek at their brokerage and 401k statements yet.  When they do, will they hang on?  With the shops closed and the streets cleared, I don’t think so.

“Congress is Sending Out Checks and More Stimulus is Coming Etc. Etc.”

I already wrote a rant on this.  I expect the governmental response will be inadequate and behind the curve.  Until we see something approaching a “debt holiday” (no payments, no collections on mortgages, SMB debt, leases, corporate debt, credit cards, the whole kit and kaboodle), the government response probably isn’t there yet.

Checks are a good first step, but they will be swamped by the depth of the crisis.  They need to be If that few thousand is a down payment on a much larger, longer, broader support package then maybe we avoid the worst of the hit.

Also like in 2008, a looming election will distract, distort, and delay US  Governmental response.  Note that the Democratic party has ZERO incentive to help Trump get re-elected.  Their “smart” path (politically) is to look/sound concerned while throwing sand in the gears until November 4th.  We all know Mitch McConnell would be moving like molasses if Obama were in office right now – deaths be damned.  Mitch’s example blazed a path.  Pelosi and Schumer may now follow.  Craven self-dealing may end up the only bi-partisan thing left in Washington right now.

On the other side of that coin, don’t be surprised to see Fox News start up an increasingly shrill campaign to “postpone the November election because of the virus!!!”  You read it here first 🙂

“The Financial System is More Resilient After 2008.“

Yes.  No thanks those who’ve worked so hard to water down that legislation in the years since.  But things are still in much better shape.  If we were facing a mere 100 year flood, we’d probably be OK.  But this argument doesn’t square with the economic reality of months-long global shut down.  This is a 1,000 year flood.   Rationally, no efficient financial system SHOULD be designed to handle that. So it won’t,  Something will break.

Only when the tide goes out do you discover who’s been swimming naked. – Warren Buffett

Someone big out there is going to be caught swimming naked –  holding too much debt with too little liquidity.  And they will go bust.  Which will cause other folks to go bust.  Until we see that first wave of bankruptcies, we haven’t tested the system.  The secondary wave of  bankruptcies will start the real stress tests.  The third and fourth waves will be the real tests.  We haven’t seen the first bankruptcy yet.

We also haven’t seen the “little people liquidations” yet.  The restaurant owner cashing out his portfolio to try and stay afloat.  The middle class family that just bought the new house cashing out the 401k to make the mortgage and put food on the table.  The debt-dependent wealthy families that lose a breadwinner or ran with too little cash cushion because “bad things only happen to poor people” (those same folks who had to sell their houses in tony suburbs during the mortgage crisis).  All that is to come.

Lets be clear about the ONLY thing I knew writing that note back in March 2009.  I had NO IDEA when it would get better.  I just knew it couldn’t get (much) worse.  The title says it all.  “My Centre is Yielding. My Right is Retreating. Situation Excellent. I Attack!”  Sometimes attacking is the only defense you have left.

We’d already been though months of liquidation in markets.  All sellers, no buyers.  That  week, two of the networking equipment companies I covered told me customers were making capital plans on a rolling two week basis (vs a typical 1-3 years).  In other words, the demand and planning horizon had shortened to hand-to-mouth, step-by-step.  Abject fear.

That is what a bottom looked like back then.  It might end up being what one looks like now.  And we aren’t close to that yet.  I hope I’m wrong.

* It took me a while to get my head wrapped around the scope of this crisis.  In short, the stocks I owned were actually doing great.  So the disaster befalling the broader markets over the last few weeks didn’t register as it should have.  The only special pleading I’d make in my defense is that damn Saudi/Russia oil pumping war that came out of left field for most folks (including myself).  Scary how that has been almost forgotten a week later.

* I hit this moment of clarity this Monday, March 16th.  I’d talked to some friends were weren’t (yet) stuck at home by government order.  By pure chance, I’d also watched a clip from the movie “Margin Call”(see below – do watch it).  Actually watch the whole movie.  It remains the most realistic Wall Street movie I know of – no villains no heroes just a brutally honesty-among-thieves, zero-sum game.  For a reminder of how DC really works, I’d recommend the movie “Wag the Dog.”

* It is worth reading the background to Foch’s quote “My Centre is Yielding. My Right is Retreating. Situation Excellent. I Attack!”  A link to the Wikipedia article.   https://en.wikipedia.org/wiki/First_Battle_of_the_Marne

Current S&P 500 With (Arbitrary, Non-Expert) Support Lines Drawn In By Yours Truly 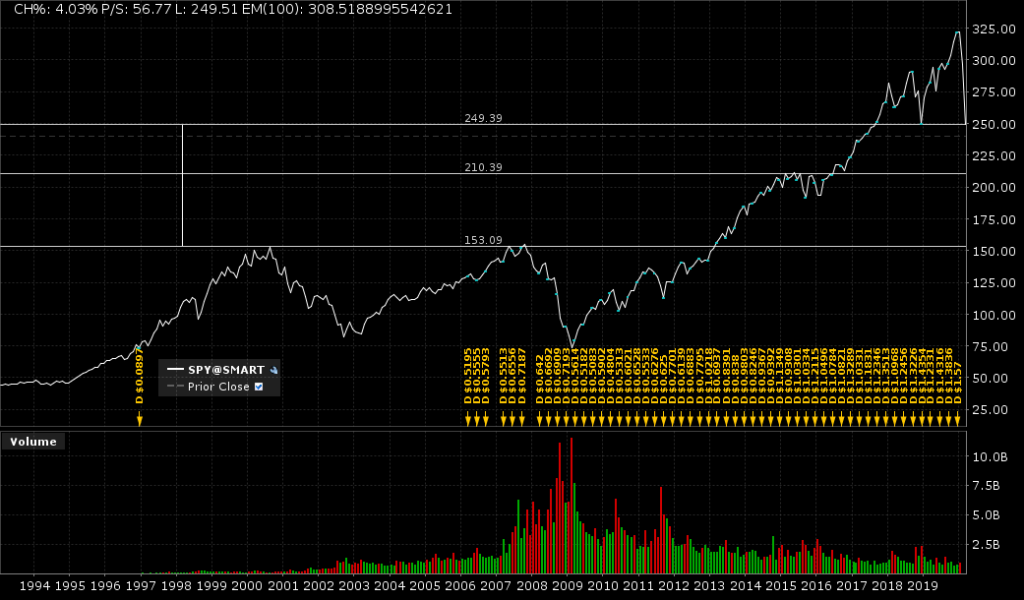